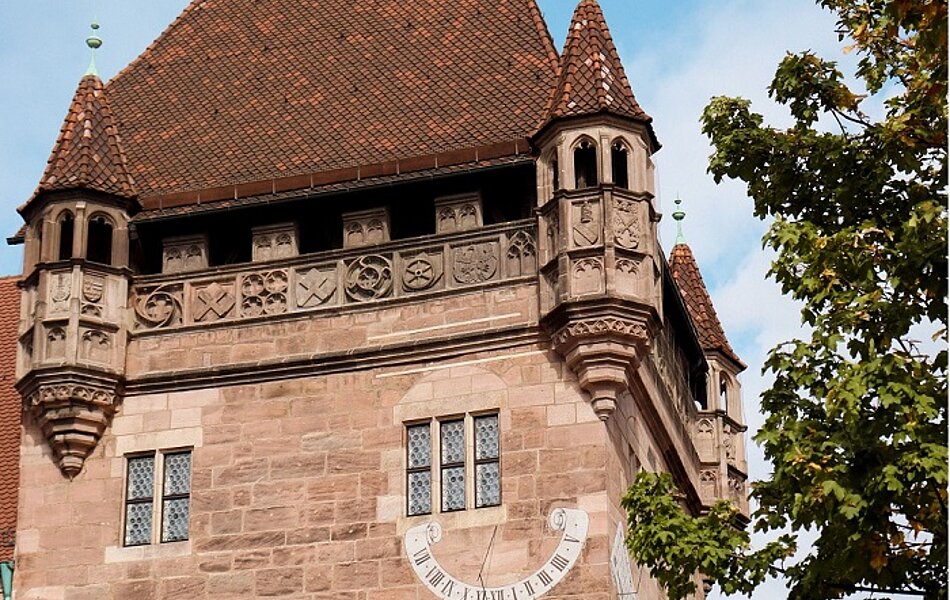 The Nassauer house
Our receptionist Sara will take you on an Italian walk through Nuremberg's Old Town.

Join Sara on a walk and go in search of lost time and hidden connections.

I am often asked what brought me, an Italian, to Nuremberg. My hometown Padua is in the Veneto region not far from the city of Venice. I used to visit the City quite often and I just love it.

Several different languages and dialects, cultures as well as landscapes follow each other on the 700 km route from Venice to Nuremberg, yet both cities have much more in common than one might think. It is often details that are forgotten or simply overlooked nowadays. The magic of a journey, in my opinion, is to look for and find these hidden connections. Often a special look, an unexpected detail or an old object is enough for us to get the feeling of suddenly being transported to another time and place.

If you stroll along Königstraße, starting at the Hotel Victoria, you will immerse yourself in the romantic atmosphere of the old town along the many lovingly restored houses in typical Nuremberg style. Opposite the Church St. Lorenz, you will immediately come across the Nassauer Haus, which stands out from the overall picture of this part of town. It is a residential tower with Gothic style elements, originally built in romanesque style. The spread of this construction method, which served as a defence, was realised through the first trade relations with northern Italy in the 13th century.

Over time, these relations increasingly shaped the development of Nuremberg's merchant community. Thanks to good cooperation with Venetian houses, Nuremberg merchants gained access to central European markets for spices, silk and cotton from the 14th to the 16th century. Through Venice, Nuremberg traded trinkets, cloth, leather, honey, amber, as well as metals and precision instruments. Spices in particular were highly sought-after and lucrative imported goods in the Middle Ages, so famous that the rich Nuremberg merchants were derisively called "pepper sacks".*

Shortly before the Museum Bridge, you will see an imposing building on your left, which today houses cafés and stores. Only a relief (from about 1569) by Bartholomäus Viatis from Venice at the corner of Kaiserstraße and Königstraße reminds us how this corner looked like back then. His magnificent residence was unfortunately destroyed during the second World War. Viatis was one of the most influential merchants from Nuremberg, who was able to acquire his own warehouses in the so-called "Fondaco dei Tedeschi" (Warehouse of the Germans) in the lagoon city. The once most beautiful Renaissance burgher house of Martin Peller, Viatis' trading partner and son-in-law, was also unfortunately badly damaged.*

Turn left into Kaiserstraße and then go immediately right towards the bridge “Fleischbrücke”, which was built in 1598. Take your time here and admire this masterpiece of German engineering. On the plaque we read that this was inspired, in the broadest sense, by the Rialto Bridge. The view, in any case, is equally enchanting!*

On the other end of the bridge is the famous portal with the stone ox and a curious Latin inscription. The place where the café Starbucks is now located used to process meat. The ox indicates the important role that Nuremberg butchers had in the society of that time and the privileges they enjoyed.

From here you come directly to the traditional and always lively main market. You should not miss there the "Beautiful Fountain" or the "Männleinlaufen" on the tower of the church of the lady (daily at 12 o'clock).

It is also worthwhile to pause briefly in front of the building of the IHK and look at the beautiful mural with the medieval "Kaufmannszug". This is the very area where the Nuremberg stock exchange was built in the 16th century, which remained an important link in trade between Italy and other European economic centers until the Thirty Years' War. A little further on the right side, the Old Town Hall impresses with its detailed west facade in the classical-Italian Renaissance style.

We are in the noble part of the city, whose center of attraction is the Church St. Sebaldus. Among the wonderful art treasures, the myth surrounding the relics of the Catholic saint Sebaldus also finds a special place here. Right next door on the current Sebaldusplatz stood until 1944 the Moritz Chapel with the famous restaurant "Bratwurstglöcklein", it was attached to the north side of the chapel.

At the corner of Sebaldusplatz and Burgstraße, an old symbol still adorns todays Kugel-Apotheke, thus opening another window of time. A rumour says that at this place in the 18th century, a panacea was made from snakes and herbs. The miracle cure "theriac" from ancient times, was especially popular in times of the plague.*

Now walk up the Street Burgstraße to the City Museum in the Fembo House, Nuremberg's only preserved merchants house of the late Renaissance. Here you can admire the magnificent Baroque ceiling (1674) by the Italian stucco artist Carlo Moretti Brentano and explore 800 years of city history in compact form in the permanent exhibition "Crown - Power - History".

If you have not yet been charmed by this journey through time, a visit to the Imperial Castle will certainly convince you. The castle complex is just around the corner from the Fembo House, and the ascent rewards you with a breathtaking view of the old town and a tour that reveals more exciting stories and legends. In particular, the original preserved double chapel of the Imperial Castle, built around 1200 and miraculously still intact, illustrates the Romanesque architecture.

From the castle, the alley "Am Ölberg" leads you up a narrow staircase to the square Tiergärtnertor, where the ensemble of half-timbered houses and sandstone buildings, as well as many charming details, such as the statue of St. George as the dragon slayer at Pilatus House, the steep alleys with the fountain in the middle and the imposing city fortifications, send us back to the time of the late Gothic. This magical place was home to Albrecht Dürer (1471- 1528), whose Italian-inspired artwork introduced the humanist worldview to old German art. In particular, his time in Venice influenced his work and thus also influenced the culture north of the Alps. *

Although trade relations lost their importance with the demise of the Serenissima, the love of art and culture remains strong, and the friendship between the two cities is still very much felt today. After the La Fenice theater burned down in 1996, the Venetians gave the city of Nuremberg a magnificent gondola as a thank you for their generous support during the reconstruction. This gondola is now located on the first floor of the new City Hall. In addition, the people of Nuremberg enjoy genuine Venetian flair every year during the week of the "Italian Market". With typical local gastronomy, Venetian masks, Murano glass, jewelry, art and fashion from Veneto, you feel much closer to the lagoon city on the bridge Fleischbrücke!

Not far from here, on the façade of the house at Weinmarkt 10, the lion of St Mark with the open Gospel smiles with joy again and perhaps feels a little less homesick at this time...

Now you have received numerous impressions of the relationship between Nuremberg and Italy and can let the small historical walk linger in a café, for example in the café "Di Simo". Afterwards you can walk over the Fleischbrücke towards the Lorenzkirche and back to the Hotel Victoria.

I wish you a lot of fun with this little Italian trip! 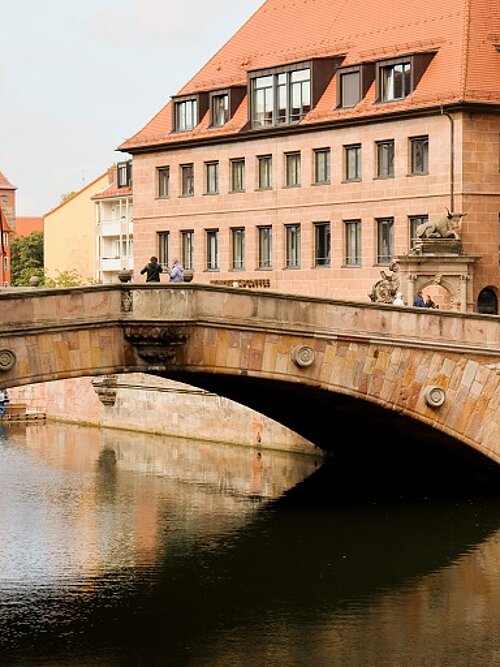 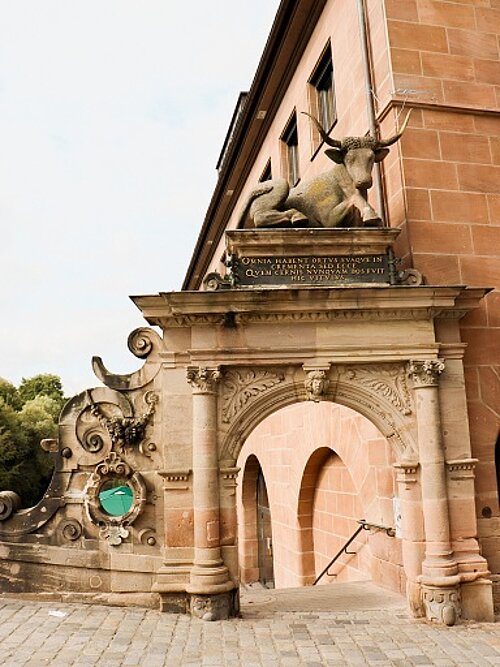 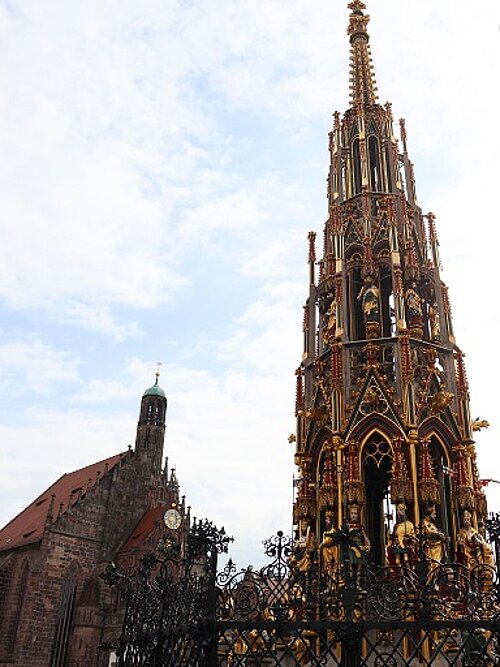 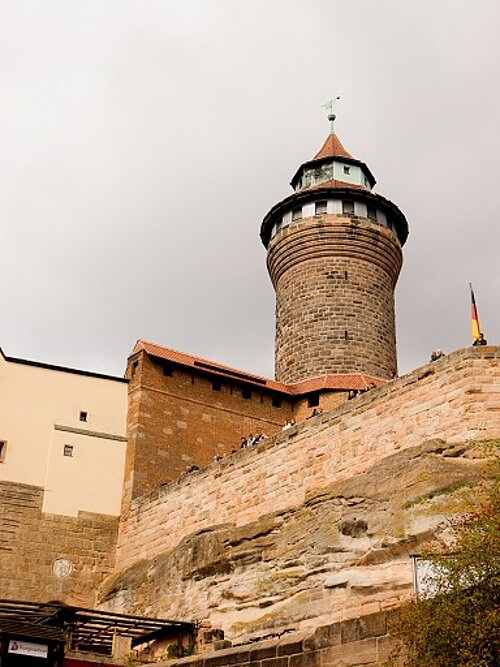 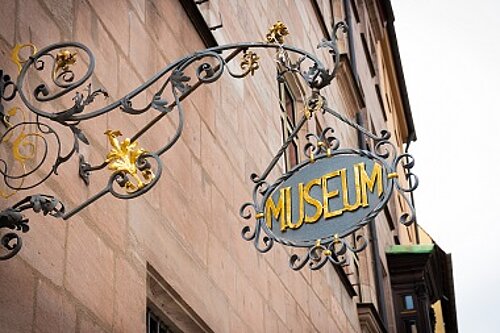